As part of ASC’s Croydon Studio inaugural exhibition 40° Celsius, which ran from the 16-25 November 2018, I exhibited an installation of clips of footage that I had taken from the windows in my new studio, F23, in the ASC Grafton Quarter.

I had selected this studio largely due to the windows on two sides, which gave both direct sunlight and a view of the factory wall on the adjacent site. I knew that I would want to make work using the view though these windows, and so I started filming on the day I took possession of the studio. This was also the first day that tenants of the studios could move in, so marks the first day of the Grafton Quarter ASC studios. I continued to film in my first week of occupation of the studio, and then again, once my work had been accepted for the 40° Celsius exhibition.

The recordings below each were displayed on a different screen.

The realtime footage (23rd September) was projected onto a wall (using my HD projector). This clip was the most performative – it showed the shadows of me and my partner projected onto the factory wall, from sunlight that has first passed through the studio, via its adjacent corner windows. As we became aware of our shadows projected in this way I stared recording, and we each performed movements, some deliberate, some the informal gestures of conversation.

During the private view of the exhibition a pair of children played with casting shadows in the light of the projector. Their shadows (of hands transformed into animal shapes) overlaid the shadows within the footage.

The other four clips (above), along with live streamed footage from the studio window,  were shown on box screens, borrowed from ASC. I was excited to use these screens, to have the physical object of the screen so dominant in the space. The screens are analogue technology, the digital image fed from a series of media players. The media players were each housed in a black cardboard box, and the power cables taken back to the walls under floor cable guards. These additional forms and lines worked with the box monitors to structure the space.

The video projector was placed on top of the smallest box monitor, emphasising the change in technology, and the quality of the screen object in each. 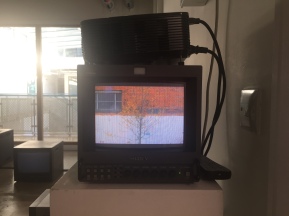 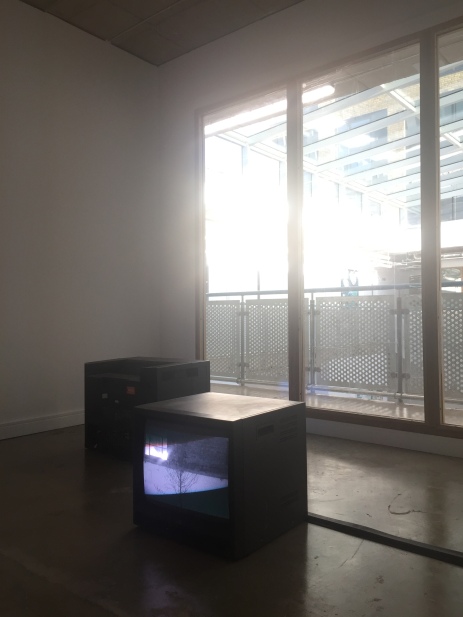 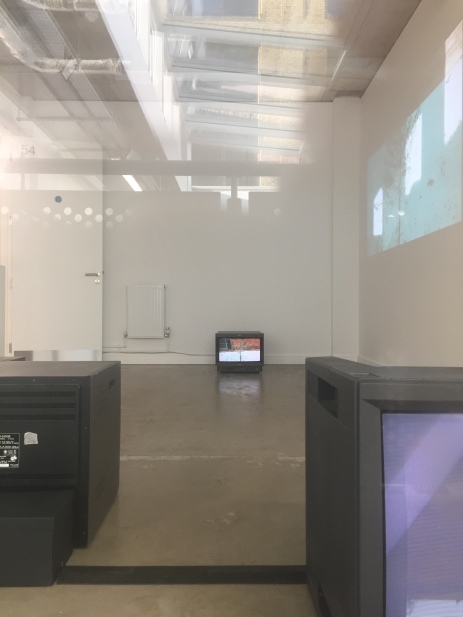