I revisited the interior of the perforated silk cone when back in Austinmer, after the discovery of the camera obscura effect in the footage taken a year ago – Silk cone found object models

This time I positioned a single cone on top of a dusty mirror 1 that was on the back verandah table, and placed the camera at the top of the cone (rather than underneath it), looking down to the mirror, thereby doubling the cone. This camera viewpoint has a strange effect on the perception of perspective – the cone appears more like a tube, whereas with the previous footage the view up from the wide base of the cone exaggerated the perspective. The point where the cone meets its own reflection at the mirror’s surface has a bright circle where the thickness of the glass of the mirror allows light ingress. 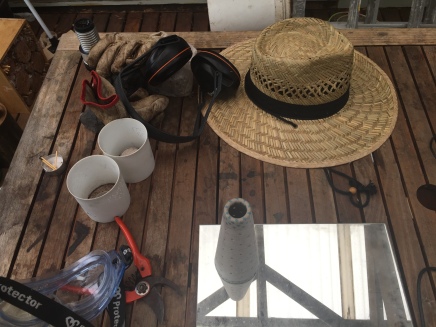 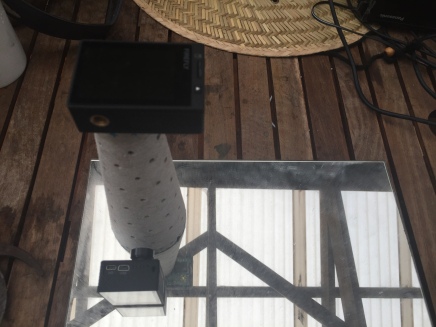 As I am interested in multi camera projects I also filmed the cone from the outside. Both cameras were the Firefly 8S, in time-lapse mode, 1 frame every 2 seconds @ 25fps. The side by side footage (above) is sped up by 500%, providing a temporal scale of 1:250. The two sections of footage are carefully temporally registered, so that the light fluctuations in each view align.

[1] Redmond was using the mirror as a tool in his ongoing “projection” cyanotype experiments.