In the summer of 2018 I was artist in residence in the Croydon Arts Store (CAS) Research Space. The CAS is a temporary takeover of a vacant shopfront in the Whitgift Centre, Croydon, in the period before the shopping centre is demolished to make way for a new Westfields. The CAS is run by a consortium of local and neighbouring arts organisations, including Croydon Council, Turf Projects, Art Halo and Kingston School of Art. Part of the remit of the CAS is to “act as an action research space to test the role of arts and culture in a shopping centre” – as part of my residency I wanted to contribute to this research project, to see how my work with cyanotype printing might engage a non-specialist community in some of the wider practice-based research questions within my work.

As a Croydon resident, and a teacher at the Kingston School of Art, the space has a particular relevance for me. As I had begun working with larger scale cyanotypes (in Grezzo and Austinmer), printing the shadows of site specific architectural elements, I was looking for a place to continue this practice, and which also offered enough space to review the work undertaken so far. The CAS Research Space residency also brought with it the opportunity to disseminate this aspect of my practice to the local community, both though the display of work in the shopfront and through several free public workshops.

I used the architectural element of the “shop-window” to exhibit a rotating display of my cyanotype prints. While presented “informally” – stretched across the timber pallets on the floor and pinned to the walls and ceiling – the display was still carefully arranged to present itself to passers-by. On the long cork pin-board wall of the CAS Research Space I displayed work made at different locations around the world, each presenting a trace of the objects and spaces in those places. As I made new work I changed what was on display, and more of the pieces were made in the immediate context (of the shopping centre) or the wider area, including my own home and garden.

While I was working in the space users of the shopping centre and participants of the local art club taking place in the adjacent “First Floor Space” (part of the wider CAS remit), came into the research space to look at and talk to me about my work. The single colour of the work and the large scale of some of the pieces, with recognisable objects showing in the prints, made the work enticing and also accessible. I explained the process of cyanotype printing, and encouraged people to come along to one of my free workshops to try it for themselves. 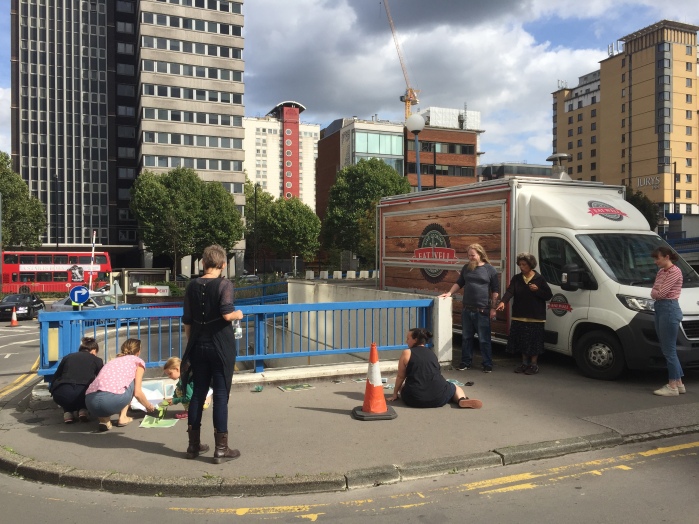 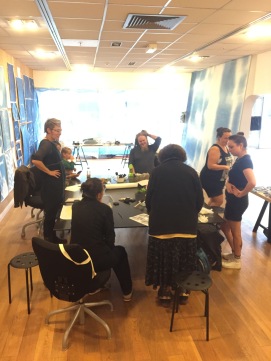 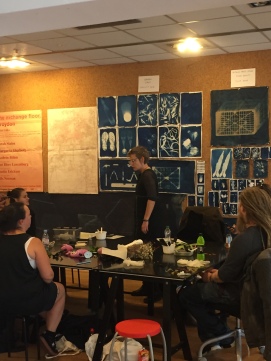 I undertook two free public workshops wile working in the CAS. Participants were encouraged to bring “found objects” that might cast interesting shadows for the prints, and I supplied the materials and equipment. In the workshops I provided a very brief introduction tot he history of cyanotypes, including its invention by John Hershel in 1853, its use by Anna Atkins to produce her seminal illustrated books of photogram prints of British algae, and its use for reprographic purposes, to make “blueprints”.

During my residency I developed my work producing large scale cyanotypes to “capture” the 1:1 shadows of architectural elements. As one of Britain’s oldest shopping centres, and originally constructed to an open air design, it’s glass atria (installed as part of a refurbishment in the 1990s) afford the open spaces a large amount of daylight and sunlight. The structure of the atria roofs cast compelling shadows, which moved throughout the day, marking time, orienting the inhabitant in space and time.

Continuing my use of A1 sheets of “Butter Paper”[1] in Australia at Easter 2018, I sourced a roll of catering greaseproof paper, 450mm wide and 50m long. This allowed me to produce long, but narrow prints of elements such as the shadows of the railings in the Whitgift Centre.

Exposure of the railing cyanotype with intermittent cloud coverage.

In order to make larger prints I began to explore the use of fabric. I found an online source for scrim and muslin, both lightweight, low-cost cotton fabrics. 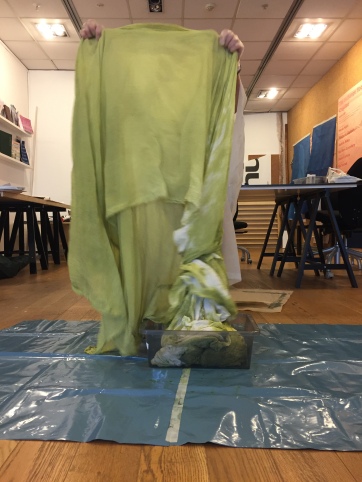 The fabric was coated with diluted cyanotype chemical by a process of soaking and wringing (while wearing a protective poncho). 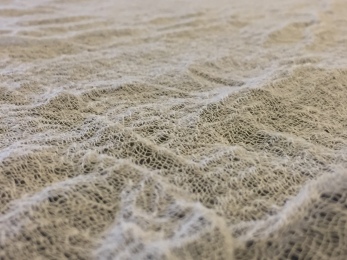 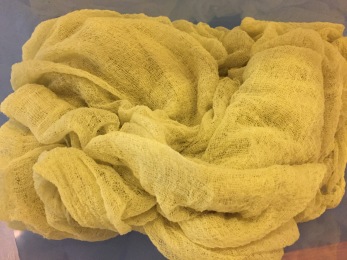 It was then dried in the CAS Research Space storeroom.

The lengths of scrim allowed me to make prints approximately 1.2m wide, and several meters long.

However, the scale of the shadows of the roof structure required much larger widths, and so I sewed together 3 x 3m lengths of muslin[2] to make a piece that was 3.6m wide. 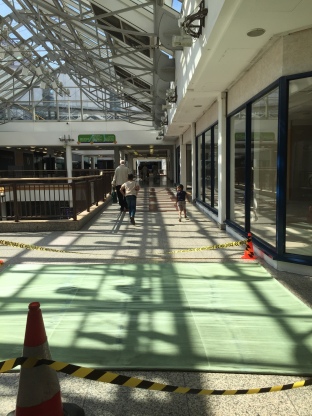 [1]Available only in Australia, “Butter Paper” is a form of thin paper used for architectural design development drawing. The equivalent “detail” or tracing paper in the UK does not have the same wet-strength characteristics as butter paper, making it less suitable for cyanotype printing. Butter paper appears to be a form of greaseproof paper, which due to its use in catering, does have a good wet strength. I have not found any reference to butter paper in the UK, and so have instead investigated the availability of large sheets of greaseproof paper. This is not to be confused with baking paper, which is invariably coated in non-stick silicone, making coating with cyanoptype chemical impossible as it just beads on the surface of the paper.

[2] The scrim was too fine and open a weave to sew by machine.